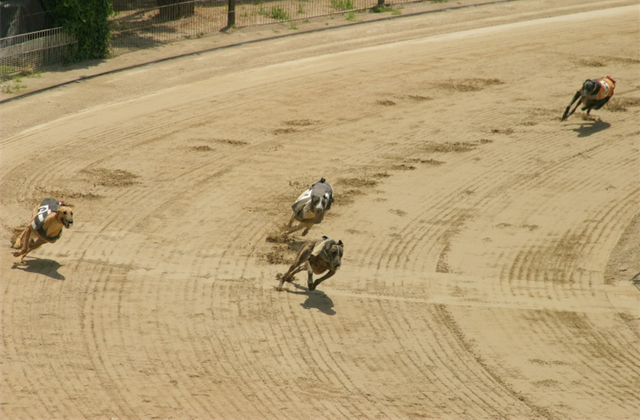 Every dog has its day. So the saying goes. Yet for some greyhounds, what that day has involved has not exactly been pleasant.

Following in the wake of the ABC’s Four Corners exposé in February of the greyhound live baiting scandal, which saw rabbits, possums, and even piglets being used as lures on training tracks for the greyhounds to chase and kill, positions in the official greyhound industry have met a similar fate. The board of Greyhound Racing NSW (GRNSW) was dismissed by the NSW State Government; standing down 10 trainers and suspending 28 dogs. Racing Queensland has acted similarly, 36 greyhound trainers have been suspended, six of which have been banned for life.

Two Queensland men were charged over the live baiting incident.

Were the live baiting scandal not enough, this was followed shortly by the discovery of a mass grave of 55 greyhounds near Bundaberg, Queensland. Like dominoes falling in grim succession, there are now police investigations underway in the Hunter Valley, New South Wales, of what are the suspected mass graves of more greyhounds.

One example, may be an isolated incident.

Three examples, would suggest otherwise. A pattern even.

And this appears to be the case with reports of similar mass graves of greyhounds found in 2009 in Victoria. Similarly, a Central Coast woman claimed to have found another example of a mass grave on her property she bought two decades ago at Warnervale, NSW.

The focus need not remain as though exclusive to Australia. Other examples of mass graves of greyhounds being found around the world are not uncommon either. One example would be that of seven racing greyhound corpses found in a mass grave in Limerick, Ireland in 2012. Yet while seven dogs there may pale in comparison to the 55 found in the Queensland mass grave, even one dog unnecessarily killed because it wasn’t a race winner could, and probably should, be enough to sicken people.

The current round of Government inquiries into the greyhound racing industry are not the first either. The NSW State Government held an inquiry and published two reports in 2014. Owing in part to what was viewed as hearsay and anecdotal evidence, recommendations included inspecting licensed kennels biennially along with the ensuring the proper investigation of live baiting allegations.

A year on, and the hearsay is evidently a lot less circumstantial.

Yet even something like inspecting kennels once in a two-year period may be inadequate on the basis of a female greyhound having an average litter of eight puppies per year.

As followed after the discovery of the mass grave in Limerick 2012, speaking for The Greyhound Rescue Association of Ireland (GRAI) Marion Fitzgibbon said:

“Last year there were 3,271 registered greyhound litters in Ireland. A conservative average of seven pups per litter makes 22,904 [sic] dogs, however less than 16,000 greyhounds were registered that year to race at 12 months old. Taking into account the number of greyhounds that retire each year due to age or injury GRAI estimate between 8,000 to 10,000 greyhounds disappear every year.”

The NSW State Government 2014 inquiry into the greyhound racing industry was criticised by the RSPCA for not going far enough to protect the dogs’ welfare.

Perhaps this is the great flaw of greyhound racing overall: Only a few dogs can be champion racers.

As for the rest, it may be good or it may be bad. That’s not to suggest most greyhounds end up in mass graves. Retirement may occur in different ways. In 2012, GRNSW admitted 3,000 greyhounds are euthanased each year in NSW. There may be a pattern starting to emerge, but much is still unobserved.

What can readily be seen, however, is the large number of greyhounds for adoption in Australia on websites such as:

Related to these numbers, the RSPCA Australia reports that around 40 percent of the greyhounds born each year – some 7,000 dogs – will never race and are surplus to industry requirements.

If a greyhound’s racing career is likely over by the time it’s four years old, given they can live up to 15 years as pets, then maybe it is time to start treating the greyhounds as dogs, and as pets, instead of as a commodity?

Perhaps the greyhound racing industry overall is in need of a very serious rethink.

Banning greyhound racing may not be the best answer.

A blanket ban on greyhound racing may result in the deaths of many more dogs. Whether of the mass grave variety or the different but by a degree of separation through them being humanely euthanased.

Banning greyhound racing seems a bit draconian to say the least. It may force it underground, leading to worse treatment of the dogs (and other associated animals).

Plus the various industry bodies, such as Greyhound Racing Victoria (GRV), may well have high standards at heart for the dogs. There does exist industry greyhound adoption practices, such as the Greyhound Adoption Program (GAP) for ex-racing greyhounds, see also GAPNSW.

Though people are interested in it, greyhound racing certainly does not enjoy the prestige or coverage of horseracing. Which although that may suggest it has a marketing problem, it’s also suggestive just maybe that it’s time to let the sport in its current form fade to more of a hobby.

Much like banning, say, football seems heavy-handed, so to with banning greyhound racing.

However, there’s a big difference between a group of people playing football in the park on the weekend, when compared to the professional and commercial level of having stadiums and many millions of dollars’ worth of contracts involved.

So don’t ban greyhound racing per se; but maybe it’s better to have greyhound owners and their pet dogs meet up and have a run around the park instead? Slowly start to phase out the frequency of racing and get rid of the racetracks. If people cease to be interested in greyhound racing, and the money dries up, this should start to happen over time anyway.

If greyhound enthusiasts and breeders are genuine about the breed of the dog, by all means preserve it. People are attracted to the various qualities dog breeds possess. In fact, as a species, the diversity across dog breeds is nothing short of phenomenal. There will be those who admire the speed and grace of the greyhound as a breed.

Various dog breeds are more suited to some situations than others. No-one should honestly be suggesting that a Chihuahua be used for rescuing people from the snow any more than they should be suggesting that a full grown St. Bernard can be carried around in a handbag as a lap dog. And though some dog breeds are more suited to being guard dogs than others, it is not typically the case that one breed of dog is used exclusively and only as guard dogs. Rather, that they could be guard dogs amongst other things such as pets.

Many breeds of dogs survive today because of responsible breeders and pet owners. Not because of devoting an entire industry to their supposed heritage function.

Yet with greyhounds, they are used primarily as racing dogs. Even to the point, that they are laws in various countries such as, if walking in public a greyhound must be muzzled and kept on a leash. Which is reflective of them being used as racing dogs. This is changing somewhat though, as cleared ex-racing greyhounds, such as GAP dogs, in parts of Australia may be given a special green collar to wear exempting them from muzzles. Remaining on the leash in public continues to be a requirement for most greyhounds in most areas however.

All that being said, a greyhound being a pet from a puppy with proper obedience training is less likely to unduly give chase than one becoming a pet through adoption or rescue once its racing days are over.

Whilst the so-called “prey drive” may strongly be there in greyhounds as a characteristic of the breed, with their instinct to give chase, there’s likely to be a significant difference between a greyhound raised to be a pet versus raising it to chase things around a racetrack. The major difference will be in the owner and how the dog is raised.

How about getting right away for the racing dog stigma with the muzzles and the leashes, and let greyhounds be considered as pet dogs as a whole? Instead of worrying about racetracks and race numbers, why not watch how fast the pet greyhound can fetch a ball? Maybe then, with such a shift, talk of doping dogs, live baiting scandals, and mass graves of greyhounds will hopefully be relegated to the past.

What do you think, has greyhound racing had its day? Should greyhounds as a breed simply be allowed to be dogs? Use the comments section to have your say. Whether the uthinki question below is a greenlight to continue greyhound racing or an answer towards putting a stop to it, it’s your collective opinions which matter.