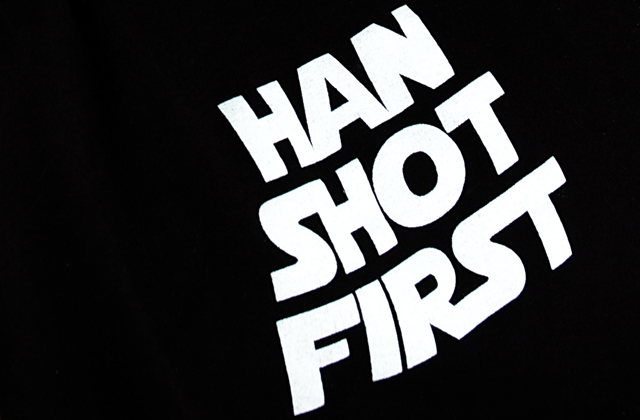 If the found Star Wars script was real, then Han Solo really did shoot first. Unfortunately it wasn’t real, and was the fourth draft. Yet was the scene with Han and Greedo unchanged from this version of the draft to what is seen in the 1977 version of the film?

Within the University of New Brunswick, librarian Kristian Brown had been digitising old materials in the science fiction archives.

Amongst the items, was a Star Wars script dated 15 March, 1976, complete with the Lucasfilm Industries stamp.

The script is actually for Saga 1 instead of its later, and better known, re-retitled name of Star Wars: Episode IV – A New Hope.

It also contains the original name of the character Luke Starkiller, instead of the later revision, Luke Skywalker.

However, according to statements from Lucasfilm Publicity, they believed it appeared to be a replica of the early script sold at conventions. And that it was “fan-made”.

Turns out, they were right. It was in fact a copy. Not an original script. Smug, were they.

But who shot first, Han or Greedo?

Harrison Ford has of course weighed-in on the long-running debate, answering on Reddit: “I don’t know and I don’t care.”

George Lucas has long maintained that Han acted in self-defence. Shooting in response to Greedo. In the original film, Han apparently fires without warning at Greedo. Killing the alien in cold blood. With the re-released 1997 edition of the film (and the editions beyond that to date), Lucas changed the scene so Greedo shoots first, misses, with Han responding by returning fire. Lucas argued the latter added clarity to the matter.

Star Wars fans, especially those on the internet, have debated it long and hard since. Intention or revision?

(Never mind the latest revision to the Star Wars canon, that Han Solo had a wife, Sana Solo, as well. Making Han Solo potentially cold-blooded and adulterous, that scoundrel.)

But now, if the found script is to be believed, there’s a definitive answer. And it does not gel with George Lucas’ claim.

As librarian Kristian Brown said: “Based on the script, I can tell you 100 percent, Han shot first.”

Does that put the debate to rest, finally?

Without knowing whether that part of the draft script was unchanged in that particular scene in the original Star Wars (1977) film, it looks like the debate is still set to continue. Even if it does seem to run counter to George Lucas claiming it was always his original intention that Greedo shot first, but is draft versus final script versus films splitting (Wookiee) hairs?

So debate away, by answering the related uthinki question in the button below: