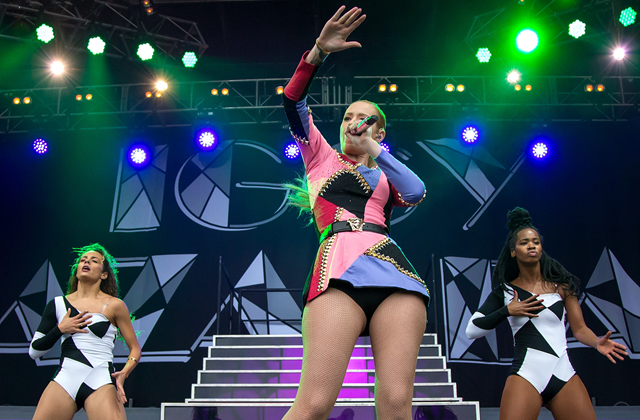 Iggy Azalea and Bonds Underwear: Comments of All Colours

Iggy Azalea. She’s so fancy. But what you may not already know, is she’s now also the new face, body, and probably booty, of Bonds underwear.

As one of the new celebrities posing for the underwear company, the comments have already begun to fly about Iggy.

One commentator, Eleanor Robinson for The Guardian, finds Iggy Azalea at odds with Bonds’ supposed image of the Australian girl next door.

Nothing particularly wrong with that. Opinions are what they are.

However, the notion that former Bonds girl, Miranda Kerr was ever somehow the girl next door is sure to bring a wistful smile to the faces of many. Along with memories of her initial Bonds campaign back over a decade ago.

For that matter, Bonds has helped to launch, or at least play a role in launching, the careers of models such as Sarah Murdoch, Shanina Shaik, and Kelly Gale.

So of these girls next door, it must be quite the neighbourhood.

Patrick Rafter probably should get a mention as well, because back in the day, he wasn’t exactly the boy next door either.

All well and good, but the commentator actually goes quite a bit further regarding Iggy Azalea representing Bonds. Of which a screenshot (taken of the article as it appeared on ninemsn) is shown directly below, because editorial revision may well kick in: Yes, it went there. And said exactly that.

Putting Miranda next door for the moment, what are people to make of the “wholesome white femininity” remark?

How quickly can those on Twitter say: “Flame on!”

Perhaps it was simply a gaffe, a faux pas, and other such innocently misworded things.

Why it’s rather curious, stated in a euphemistic manner, so to speak, is that the rest of the article does not exactly spare the vitriol.

So in context, it may be interesting to watch.

This is suggested in light of other recent examples where the choice of the word pertaining to race has proven so sensitive.

“Maria has taken after her half-Jamaican mum with dark skin, brown eyes and curly, dark hair but Lucy got her dad’s fair skin – good on her! – along with straight red hair and blue eyes.”

The result? The “good on her” remark was perceived as racist. With an online petition gathering nearly 5,000 signatures calling for an apology.

All of which seemed to ignore the good-natured context of Armytage’s off-the-cuff remark and frequent self-deprecating references to her own fair complexion with her tendency to get easily sunburnt in Australia.

Along with her apologising, the twins themselves said Samantha Armytage has nothing to apologise for.

Another example was that of earlier in the year, in January when actor Benedict Cumberbatch made the following remark on a US talk show:

“I think as far as coloured actors go, it gets really different in the UK, and a lot of my friends have had more opportunities here [in the US] than in the UK, and that’s something that needs to change.

“Something’s gone wrong, we’re not representative enough in our culture of different races and that really does need to step up a pace.”

Despite his message advocating equal opportunity, that did not stop a lambasting of him for use of the word “coloured”.

Which was, and is, seen by some as being racially pejorative. And they were more than vocal about it.

Cumberbatch subsequently apologised calling himself an “idiot” over his word choice.

All of which tends to beg the question of how does one now refer to the skin colour which is race-related and not offend people?

Is “white” preferable to “Caucasian”?

Is “black” preferable to “Negro”?

Yet what of “yellow” which has typically held a negative or racist connotation, is it now to be revised towards being the politically correct terminology for those of Asian or Hispanic ancestry and appearance?

Let it not be forgotten that “redskin” has seen its fair share of controversy, including the related to the name of the American football team.

Or, as a society, are people frequently becoming too sensitive regarding any phrasing pertaining to skin colour or race, lest they be perceived as racist?

Where exactly that leaves the remarks of “wholesome white femininity” regarding Iggy Azalea in the Bonds commercial is up to you. Context should matter. Maybe it fits like underwear, maybe it doesn’t. Who can say these days? Comment away, and answer the related uthinki question below.