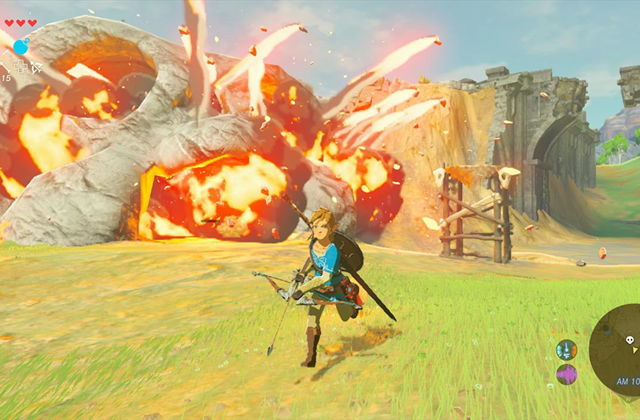 Is No Playable Female Link in The Legend of Zelda: Breath of the Wild, Really that Bad?

There have undoubtedly cases where Nintendo has been a bit old fashioned and overprotective at times. But deriding Nintendo for being parochial and conservative and supposedly not wanting to allow “lesbian love” into The Legend of Zelda: Breath of the Wild is to fundamentally miss the point.

It’s seemingly to push an agenda which is unlikely to even be there.

Are games in The Legend of Zelda series really even about love?

Eiji Aonuma’s comments (which could be somewhat lost in translation) about “balance in the Triforce” and choosing the “simpler” option of retaining the traditional gameplay roles of the male Link and the female Zelda does not seem unreasonable, given the size and scope of the new Zelda game, the storyline of series, and the nature of the games themselves.

They are games to be played and enjoyed.

Where that escapism is often with a child-like innocence.

Without wondering whether if attacking Bokoblins is a racially motivated hate crime or if wiping out hordes of Bokoblins represents an act of genocide. And look at the colour of their skin…

If some wonder about these issues, then that is their prerogative and their interpretation.

Similarly, that doesn’t mean people can’t find the Zelda stories to be about love if they want to.

But if some of these people crying foul over the apparent lack of Sapphic love, gender equality issues, and no playable female Link, have actually played the games, then surely they should also know what The Legend of Zelda series is about.

Does homophobia or anything like that even ever enter the Zelda game world?

In the Zelda games series, there are no shortage of characters who could easily and euphemistically be described as androgynous and/or colourful, but anything beyond that is in the eyes of the beholder.

Just because the main story elements essentially are Link, Ganon, Zelda, and the Triforce – or LGZT as an acronym – does not mean this needs to be converted into some sort of secret LGBT agenda.

Regardless of if Aonuma or any other Nintendo employee is for, or against, any of this.

Changing male Link to a female Link is not a meaningless plot and gameplay device which can be subbed in and out of the story without altering other aspects of it.

Substituting out Link raises numerous questions integral to the story itself. Far beyond the boring case of whether or not Zelda should then become a prince or princess.

Quite simply, it would be sloppy storytelling and far removed from the Zelda series canon, where the three main characters are uniquely parts of the Triforce.

It’s a bit like chairs which have been designed to function a particular way, and then someone complains that the chairs weren’t turned upside down for some people to sit on. They might work that way, but the design and function of the chairs would then have been fundamentally changed.

Probably not for the best, and all the more for the worse if it was purely change for the sake of change. The change should be purposive and with reason.

If the characters are that interchangeable and generic, then it’s likely the story suffers. It’s doubtful it could be a character-driven narrative on that basis. Reduced to little more than a bland checklist of clichés and tropes to arbitrarily tick, to ensure that each one has been included in some way.

While The Legend of Zelda stories may not be the heights of literary achievements, they are games to be played by children and adults alike after all, the games themselves are still driven by the narrative of their stories.

Furthermore, even within the stories, Link has effectively remained wordless so that the players themselves use their own imaginations to fill in the blanks of how the character speaks and what dialogue he uses.

Unsurprisingly, it allows them to roleplay in an RPG.

If a female Link is to be a playable character in a Legend of Zelda game, then she should be meaningful to the game and important to the story itself.

Not merely a token inclusion to appease some part of the population.

If people really want a playable female character in the Zelda series, then on similar equality grounds, does this not then discriminate against Ganon?

What, just because he’s apparently evil, he shouldn’t be a playable character as well?

Done right, this might actually work. Provided the story and gameplay were properly built around the concept.

Link, Zelda and Ganon, could all be playable in three separate but intertwining storylines.

Subverting expectations common to the series, particularly about balance and the nature of the Triforce. In addition to providing a more complex narrative seen from multiple perspectives, raising questions about consequence, fate, and inevitability.

Give Nintendo another decade or so to make all this work in an increasingly complex open-world RPG and things should be fine for this new hypothetical Zelda game.

Until then, for The Legend of Zelda: Breath of the Wild, the simpler answer may be that much more feasible and without meaning beyond pragmatism.