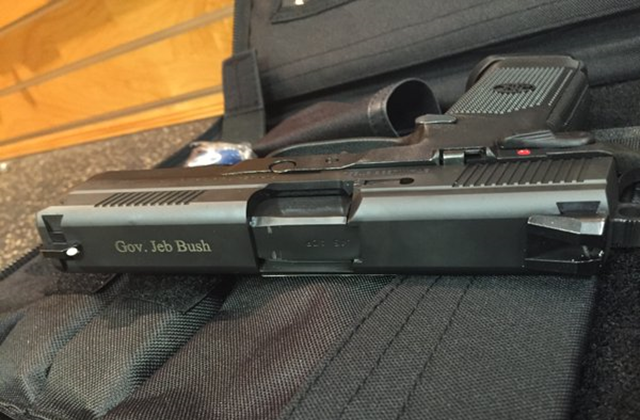 Jeb Bush Tweets “America” with His Name on a Gun

Let it be known that Republican presidential campaign 2016 hopeful and the 43rd Governor of Florida, Jeb Bush, has a gun with his name on.

He tweeted as much.

The tweet from Bush followed his visit to the firearms manufacturer FNH USA in Columbia, South Carolina.

Jeb Bush’s apparent lack of gun ownership came to light last year, when the Telegraph revealed that he and two other GOP presidential candidates, Chris Christie and Carly Fiorina, did not own guns.

The tweet and engraved name on the gun now suggests otherwise, along with Bush’s likely endorsing of the Second Amendment.

Whether the “America” gun tweet will work favourably for Jeb Bush in South Carolina seems unlikely, as he’s trailing in the polls behind the other Republicans, with Donald Trump the current frontrunner, followed by Ted Cruz and Marco Rubio.

Whereas for the Democrats in the South Carolina primary, Hillary Clinton is expected to win against Bernie Sanders.

Once again it seems the presidential candidates are drawing lines in the sand over the debate about gun control in America.