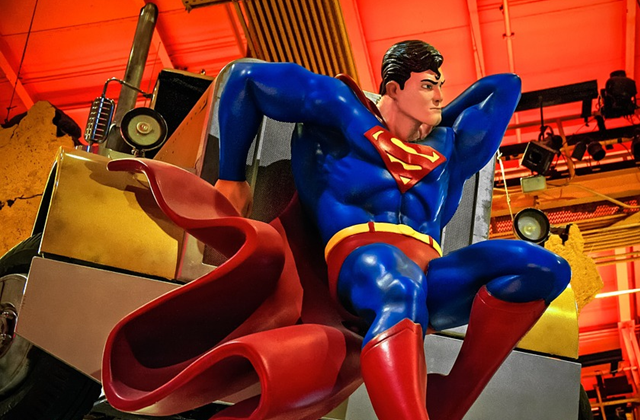 Jude Law was almost Superman but for the Costume

It turns out that actor Jude Law was approached by DC Comics for a possible starring role as the Man of Steel for the Superman Returns (2006) film reboot.

Hindsight of that how that movie panned out probably suggests it was for the best.

While Jude Law wasn’t that prescient, his problem was with wearing the costume.

It takes a special kind of man to wear spandex, and Jude Law just couldn’t see himself amongst the brave and the bold in that regard as he recounted it on The Late Show with Stephen Colbert.

“I just didn’t really want to go there,” said Law.

Faster than a speeding bullet dodged, because as Superman, Jude Law would’ve had to deal with not only wearing spandex, but also with wearing undies on the outside.

It’s claimed that director Bryan Singer sent the Superman costume, complete with an armed guard, for Jude Law to test out.

(The costume that is. Not the armed guard. It has not been conclusively proven that wearing a superhero costume actually gives you superpowers.)

“I was always worried about the outfit and I just didn’t fancy it,” said Jude.

Bryan Singer has been an interesting director regarding his superhero movies, and his approach to costumes in them. Notably causing division amongst fans particularly in his early X-Men films with the rather plain black leather suits, instead of the more traditional costumes from the comics.

With more recent superhero movies, at least where Marvel has been involved, there has been the trend towards aligning the look of the costumes across comics and cinema. Involve DC Comics in a cinematic universe (or Fox) and it’s more of a mixed bag.

Superman’s costume and its famous “it’s not an S” logo are incredibly iconic however.

It also seems that on the big screen, in live action films, Superman apparently is not an easy character to get right. The Christopher Reeve films tend to bear a certain well-received legacy, but beyond Superman (1978) and Superman II (1980), rose-coloured glasses shield the past. Modern attempts at Superman have arguably tried make him more appealing by making the content of his character darker along with the world he appears in.

Results for the Man of Steel’s adventures seem mixed at best where the nature of the character gets changed. And can be more unpredictable than the results of red Kryptonite.

Whether it was Jude Law or Nicolas Cage who wasn’t Superman here, alternate realities out there may not have been quite so lucky.