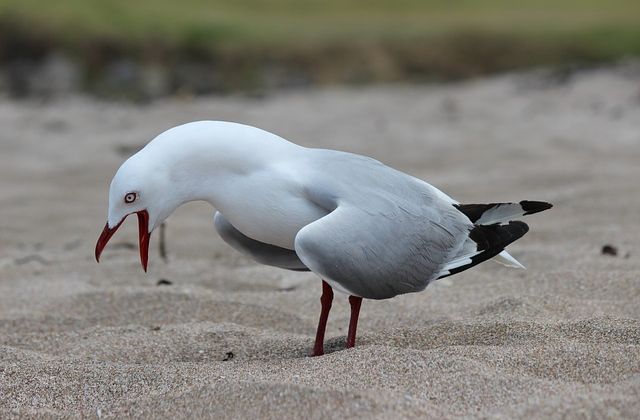 But what happens when a seagull is photographed swallowing a rat whole?

A pest war with each side doing their best to exterminate one another could be the answer.

However, if it’s reported in the tabloids, like the Daily Star, then it’s humans and especially babies that need to be concerned about these all-devouring seagulls. Especially if the apparent expert cited is Simon Prentis of the Gull Awareness Group.

“If somebody were to leave a baby sleeping in a pram or push chair and it was unattended, the worst could happen.

“I would not wish it on anybody but we’re headed in that direction.”

The anti-seagull campaigner has put up an online petition to reinstate the £250,000 budget for research into urban gulls. It is currently well short of the required 10,000 signatures milestone.

This follows the recent case of seagulls attacking and killing a five-month-old Chihuahua puppy in Devon, England.

Although as reported by the Daily Mail, a spokesman for the RSPCA said:

“Incidents like this are extremely uncommon though, and we do not want dog owners to panic.”

Both the rat that was swallowed, and sadly Bella the Chihuahua, were not exactly the largest of creatures. And there are plenty of giant rats, and even a few “Ratzillas” out there, which at around two foot in length would be more than a match for the average seagull.

Speaking to the Bristol Post, Simon Prentis, from Montpellier in Gloucestershire, UK, adds in his anti-seagull campaign:

“Everybody I have talked to about it says ‘I hate them’, they’re noisy, they’re messy.

“The main thing is that they are incredibly noisy. They disturb people’s sleep.”

Sure Prentis’ “worst could happen” but seagulls eating someone’s baby seems about as likely Mike Tyson doing the same, and such scaremongering is probably better left to movies like Hitchcock’s The Birds.

The less sensationalist and more sober reporting in the Irish Times, notes that seagull numbers have been falling over the past two decades, and seagulls very rarely harm humans but may swoop and vocally protect their nests and chicks. Seagulls also don’t possess talons, instead having webbed feet. Making claims of killer seagulls supposedly using their claws to kill sheep a work of pure fiction.

The diet of seagulls typically includes insects, earthworms, small rodents and reptiles, and amphibians and fish, along with seeds and fruit. While they will hunt for prey, seagulls will often opportunistically scavenge and steal whatever food they can find. Though seagulls have been known to engage in cannibalism by eating their own young, human babies are not on the menu.

Of the many species of seagull, the largest is the Great Black-Backed Gull (Larus marinus). Adults weigh in around 1.75 kilograms (3.8 pounds) and are 76 centimetres (30 inches) in length, with wingspans up to 160 centimetres (63 inches). Big for a seagull, but even this more predatory species will still generally only prey on things smaller than it. Lacking talons, it relies upon its beak for attack. Regardless, sheep and human babies are highly unlikely to be considered potential meals even for this largest of the seagull species.

While it was an albatross and not a seagull, The Rime of the Ancient Mariner might still caution against culling seabirds.

Now people could worry about the supposedly killer seagulls, but beyond the actual seagulls making some noise and mess and maybe being a bit territorial around breeding season, the rest is either urban myth or unfortunate isolated incidence.

Of course have your say about the matter in the comments and answer the uthinki question below: