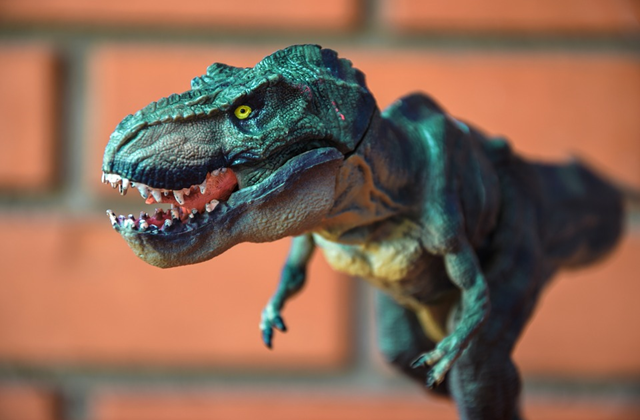 Then time moves on, and reality sets in.

Excluding for Ken Ham and his followers, who believe that humans and dinosaurs literally lived together before a Flood of biblical proportions struck.

For the rest of the folks in the world, dinosaurs may only be seen in things like books, movies and museums.

But the undeniable fact remains:

Dinosaurs were the best things before sliced bread.

Since then, other impressive things have come to pass.

And so one young boy, now a grown man, finally gets to live out his childhood dream of being a Tyrannosaurus rex and sharing it with the world.

If imitation is the sincerest form of flattery, then impersonation is a shady form of comedy.

“You’re impersonating the T-Rex, but you’re not being a T-Rex.”

However, the arms are about right.

And listen to that dinosaur roar. Terrifying.

But imagination is where it is at, without the need for computer trickery or any rubber suit enhancements.

Besides when you’re the apex predator of your time, if you want to wear an orange high visibility jumpsuit, then any dinosaur who says it’s unfashionable is destined for one serious dance off.

The guy also does a mean Velociraptor impersonation. On a smaller scale, laughs and all, than the skillset of his T-Rex version though.