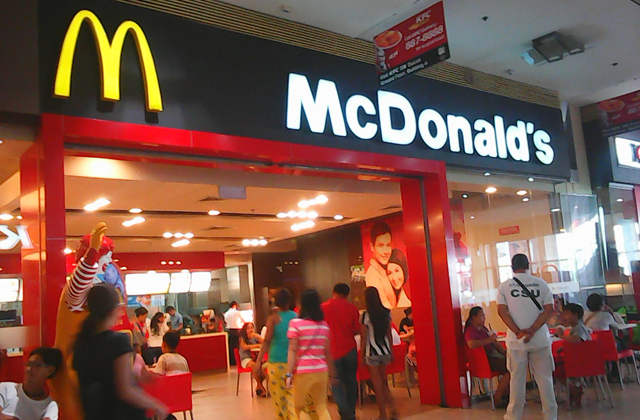 McDonald’s the once mighty, how it has fallen.

For a long time McDonald’s was iconic, and while it still enjoys brand recognition, with the Golden Arches becoming more recognised than the cross of Christianity, its relevance is again being questioned.

With this, so too are revenue and profits falling. Whereas profits vary from quarter to quarter, within a business, especially a giant corporation such as McDonald’s, revenue tends to be more stable. However, revenue itself fell near 7 percent to US$6.57 billion in the December 2014 quarter. Granted it is still profitable, but consider that’s a difference of near US$415 million less revenue for the quarter.

It faced a challenging 2014, including food safety scandals and supplier issues in Asia, closures of restaurants in Russia and Ukraine, and declining sales in its US heartland attributed largely to increased competition.

When it comes to the McDonald’s of today, people are increasingly no longer lovin’ it. Even in a platonic way. For McDonald’s, it’s the Super Size Me challenge of this decade.

Curiously for a company which prided itself on the combination of its acquisition of prime real estate for its restaurants coupled with the standardisation of its products, it’s now shying away from both of these principles.

McDonald’s restaurants around the world are being sold off and divested.

It mattered not where one was eating McDonald’s because its flagship Big Mac and other products were the same. The French fries of McDonald’s were exactly the same, no odd-lot and strangely cut potatoes fried to varying degrees. Even the restaurants by and large were the same. No uncertainty for customers. They were familiar with the restaurant and products, and knew exactly what they could get.

This also led to efficiency gains for the company and its franchisees. Follow the process. The process works.

Yet now, it seems the process is no longer working as it once did, and McDonald’s is seeking to innovate by offering more customisation to its menus. Which does seem somewhat at odds with the company’s ethos, and more like positioning it with its competition such as Burger King and Subway, both of which offer menu customisation.

Within some of its restaurants, McDonald’s has also introduced an all-day breakfast menu. No more of that 10:30am deadline. Yet to what extent this boosts sales and alters the efficiency of the food production process remains to be seen.

That is not to suggest that McDonald’s can’t reinvent itself. It has done so before with the introduction of its McCafé, and its turnaround plan may also surprise people equally as it innovates again.

However, the rather odd strategy the company is also dredging up from the past, is its mascots.

If the prominence of Ronald McDonald and his magic tricks seems like something of decades ago, that’s a fair statement. Which may be why the mascot being resurrected is none other than the Hamburglar.

Except the mascot is back, in adult form. Now more human than cartoon, but still caricature, apparently the new Sirloin Third Pound Burger has drawn the Hamburglar back into the mascot spotlight.

Whether he serves as nostalgia value for Generations X and Y remains to be seen; and Millenials may well wonder who he is, or is meant to be. The answer is:

He’s the rebooted Hamburglar, grittier and more real of sorts, and now apparently a suburban dad who likes to steal hamburgers.

Like a bad movie plot with a hint of something maybe too close to home. Perfect mascot material.

Plus of those already cynical of McDonald’s, when it comes to the revived Hamburglar mascot they are probably going to think more along the lines of the following:

Similarly, some are also decrying it’s already dead; and there are those increasingly questioning McDonald’s new approach.

It’s abandoning the iconography and familiarity that made it great in favour of attempting to compete with more nimble and changing competitors, despite it being a behemoth that cannot manoeuvre like they can. And too many menu choices just aren’t the icons associated with McDonald’s, diluting its unique branding and product lines.

As to why use the Hamburglar and not Ronald McDonald himself is a bit of a mystery. Perhaps there’s the hope that the former mascot is somehow more edgy and appealing than the latter clown.

For those pinning their hopes of a Grimace revival, that mascot is big, bulbous and purple. It’s probably a body image, health and marketing nightmare. Kind of like Cookie Monster turning to a diet of vegetables. Who knows, maybe Grimace reminds some of an irregular eggplant emoji?

Regardless of which other mascots McDonald’s resurrects, it’s likely misguided to think that a mascot alone can turn a company around, even McDonald’s. Though mascots such as the Old Spice Man and Dos Equis’ “The Most Interesting Man in the World” have had their fair share of memes and successes for their respective companies.

Whether the Hamburglar translates into a happy or unhappy meal remains to be seen.

Awareness of marketing and mascots does not necessarily translate into sales and revenue.

Will McDonald’s innovate and turn things around again, or should it return to the core strategies that made it so popular in the first place? Is it still the icon that it once was, or has familiarity bred apathy towards its branding? More to the point, is the company’s saviour really the rebooted Hamburglar and would he steal what is in the uthinki question below?