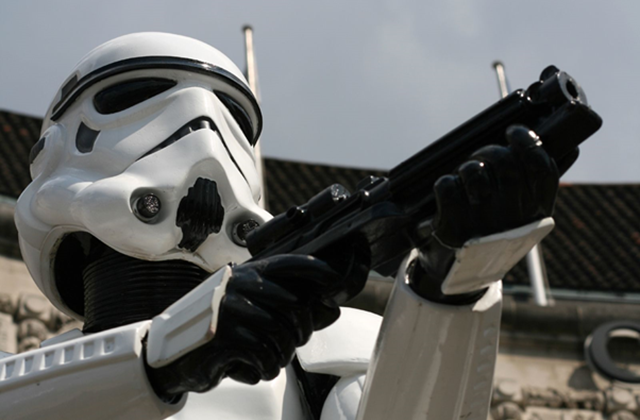 Stormtrooper Arrested for Disturbance in the School

A man in Lynn, Massachusetts, has learnt about the Dark Side of cosplaying.

George Cross, 40, was walking around near Brickett Elementary School on Lewis Street (Route 1A), dressed in costume as a stormtrooper from Star Wars.

The school’s principal noticed the cosplaying stormtrooper was carrying what appeared to be a gun.

Although suspecting the gun was a plastic toy, fearing for the younglings, the principal extended the school day by placing it into lockdown around 1:30pm.

No word on whether the principal first tried to Force push the cosplayer away.

After placing a call to 911, police arrived and arrested the cosplayer. George Cross was charged with disturbing a school and loitering within 1,000 feet of it.

Lieutenant Rick Donnelly, of the Lynn Police said: “Our feelings are that he was not there to cause harm to the kids, but he used bad judgement.” Adding that: “He did cause a disturbance and we can’t tolerate that.”

Whether the disturbance was purely to the school, or in the Force as well, was left unstated.

Fortunately the costume was of an ordinary white stormtrooper, and not a shadow stormtrooper. As such, no excessive Force chokes were believed to have been applied in the arresting process.

Is it that people are so fearful of guns in the USA, that it’s necessary to call the police over someone wearing a Star Wars stormtrooper costume with a toy gun near the school? Or is it that the precautionary principle applies, where the apparent risks that it may have been a real gun cannot be left unchecked? In which case, is the relative ease of access to guns in the USA partially to blame?