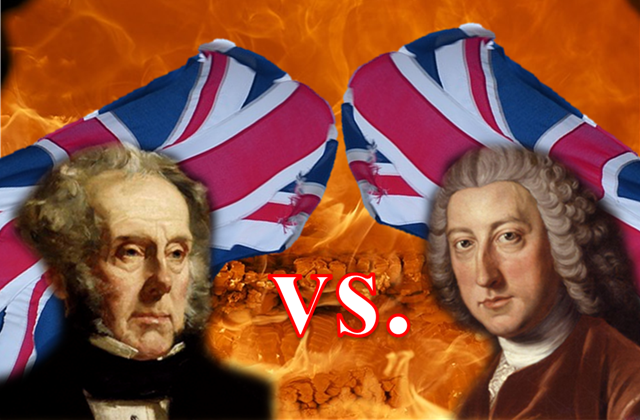 Pitt the Elder vs. Lord Palmerston

Who Was England’s Greatest Prime Minister?

The question is admittedly a little misleading, since there’s only going to be a choice of two here:

Pitt the Elder versus Lord Palmerston.

First a bit of background, even if it’s known what’s coming.

William Pitt the Elder, 1st Earl of Chatham, also known as “the Great Commoner” was described as an aloof individual and a commanding speaker. Although only holding the office of Prime Minister for two years (1766-68), his political career was both far longer and more contentious. Mainly in part due to the wars over the period, tensions with the British colonies including America, and divergent views between the people and the monarchy at the time. He also gave the world the following quote:

“Unlimited power is apt to corrupt the minds of those who possess it.”

Variants of which are still used today (though the concept of the quote is not exclusively Pitt the Elder’s). Amongst other places, Pitt the Elder has even managed to make it into that parched land of the driest British wit, Blackadder.

Henry John Temple, 3rd Viscount Palmerston, similarly also found his political fortunes tempered amongst the fires of war. Nearly five decades were spent in ministerial service of one form or another. British witticism of the times dubbed him “Lord Pumicestone” for his abrasive nature. How well he floated is unknown. At the age of 71 he first became Prime Minister, serving two terms in office (1855-58 and 1859-65). His following quote remains as wise today as it was then:

“The function of government is to calm, rather than to excite agitation.”

Sage advice into the beyond even. Perhaps not to be outdone by any comedy associated with Pitt the Elder, Lord Palmerston’s own last words were supposedly: “Die, my dear doctor, that is the last thing I shall do.”

Ultimately all of the background information may not matter too much. Especially if politics and history are about as exciting to you as a brown paper bag. But it’s what’s on the inside that counts.

As an obvious ruse to see through, for most this is probably just an excuse to recall a classic clip from The Simpsons.

Barney had an opinion on it. Boggs may have asked for it. But can you answer it?