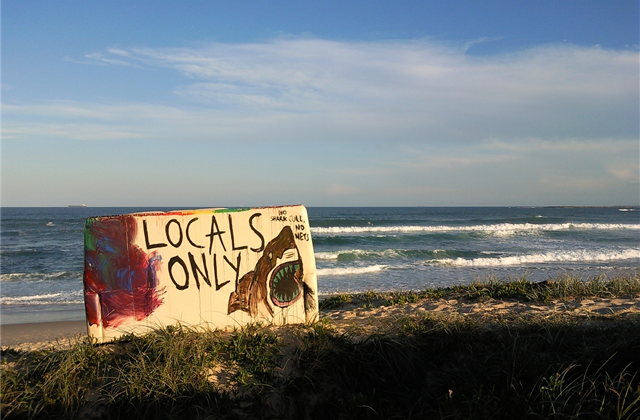 Should Beaches be for Locals Only?

Vying for territory, it’s nothing new. Animals do it. Humans do it, even if it’s often wrapped up in ownership and contract law. Yet it extends beyond that, whether it be the notion of personal space or that specific people have the right to a space. Which leads to the argument of whether beaches, or at least some of them, should be for locals only.

The argument for beaches for locals only, is along the lines of that locals tend to respect their environment more than the tourists who will do things such as leave their rubbish on the beach, or may come in and clean out almost the entire rock platform of its shellfish in one day. In contrast with some of the locals who will actively pick up the rubbish and clean up the beach, along with conserving the environment. Though this is only anecdotal, it can be observed.

There’s also the aspect of crowds and overcrowding the beach. Personal space comes into it as well.

In addition to safety issues. Locals are likely to know and respect the conditions of the beach, being familiar with things such as the tides, currents and rips.

This extends to how they may engage in activities such as rock fishing compared to those unfamiliar with the beach and the area. Underestimating the power of the ocean, turning their back on it, or not understanding that “freak waves” are actually commonplace. All of these are fairly frequent mistakes of those unfamiliar with the ocean and the beach.

It also relates to water activities and swimming. It’s not uncommon for there to be so-called “one way swimmers”. Those who can swim out (often unknowingly carried along by a rip), but then cannot swim back in and need to be rescued. Were they locals, this would likely be local knowledge, including how to deal with it (such as not trying to swim against a rip). For those other than locals, they could be directed towards safer, patrolled beaches.

The argument for making the beaches accessible and open to everyone, is rather simple. Beaches, unless specifically private beaches, are there for everyone to enjoy. Including the public and non-locals.

Leaving rubbish on the beaches could be in part addressed by making bins available to properly put the rubbish in. It could also involve the patrolling by rangers, able to give fines for littering. Similarly so regarding fishing practices and stripping the rock platforms of shellfish. Areas could be made marine parks and be clearly marked as such, with rangers patrolling to enforce the fishing laws including those related to gathering shellfish.

Crowds are often a fact of life. That people have the mobility to up and move, and find a less crowded beach should be something that they can do. Making beaches for locals only, is likely to heavily crowd some beaches and inspire non-locals to go to locals only beaches to escape the crowds at times.

What exactly constitutes a “local” is also open to question. If someone lives within walking distance of a beach, but only goes there a few times a year, does that make them more or less of a local than someone who lives a 20 minute drive away but goes to this beach almost daily? Plus how big of a territory is local for someone – is it one beach or many – and if the latter, how many beaches or how much area is it?

Beyond which, how does one become a local; and secondly, how is the locals only policy to be enforced? Be it via a police state-like demand to somehow officially prove that you are in fact a local, or, does it become a rather degrading case of neo-tribalism and the protecting of territory by the locals? Which tends to also have the unpalatable reek from the past with things like apartheid beaches. Something as a society we should not want to return to.

For the Reasonable Person

It seems, despite the desire of some to have locals only beaches, many beaches for the most part already are. Baring the main beaches, which are often also patrolled beaches with lifeguards, many beaches have a kind of unspoken law to them.

Locals will tend to go where the locals go, and they go there because they’re locals. They’ll have their secret breaks and beaches. Things which the non-locals are less likely to seek out, and instead favour the mainstream beaches.

Imperfect though it may be, there’s also somewhat of an implicit understanding regarding what may be the dangers of the various beaches. Not that everything can be signposted and every risk accounted for, but people do seem to favour the familiar and the safety in numbers approach when it comes to issues of uncertainty.

What do you think, at the beach should locals and non-locals be treated differently? Are they treated differently? Grammar aside, have you observed any examples of localism and localness at beaches, and is it more related to some groups of beach goers than others? Have your say in the comments and answer the related uthinki question below to learn what the opinions of others, local or not, are when it comes to the beach.