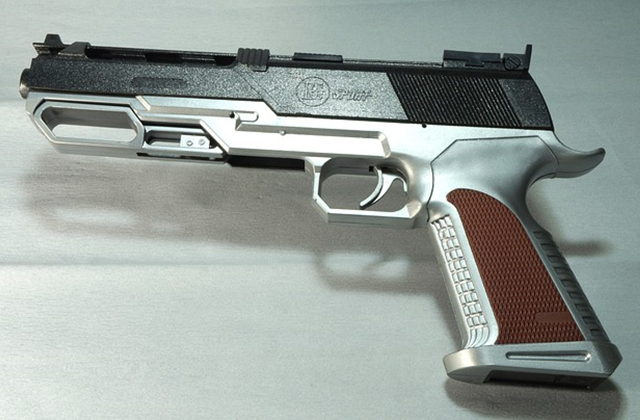 Should Realistic Toy Guns Be Banned?

Sydney, Australia, a child seen carrying a realistic looking toy gun in Martin Place has renewed debate about toy guns in general. Plus raised questions of how safe, or unsafe, it is to make toy guns look realistic; and to what degree realism should be pursued – if at all.

It follows in the unease of recent siege of the Lindt Café in Martin Place in December last year.

That people would be on edge, with a heightened sensitivity to anything resembling a gun, especially within Martin Place, is understandable.

It tends to be a combination of several things. One of which is known as the recency effect, where recent events are remembered easily and feature more prominently within the memory (likely related to the Ebbinghaus forgetting curve). This is also often related to various acts of committing base rate fallacies, and where people overweight the recent evidence as representing the true long-run probability of the event occurring. With the Martin Place siege still fresh in the memory, another incident in the area involving a gun seems apparently more probable than the true, and tiny, likelihood it is going to occur again.

Which is not to discount the potential impact of such an event. It is this very issue, because it is so emotive and can have such devastating impacts, why people in the area will tend to have a heightened awareness of anything resembling a gun. Toy or otherwise. They are sensitised towards any potential threat.

The child, a young boy, was carrying a toy AK-47 assault rifle (a Kalashnikov). And like a boy child, was carrying it in play imitation as though it were a real gun, including having his finger of the trigger. He was accompanied by an adult male, who was also pushing another child in a pram.

Whether it was simply a child being a child with a toy gun, or something more, seems to be caught up in the location of where this occurred. Perhaps suggesting that a bit more mindful oversight by the adult was warranted.

Scott Weber, President of the Police Association of NSW, believes that there currently exists a “heightened terrorism environment” and has questioned why realistic toy guns are sold. As he further said: “If someone sees what looks to be a real firearm, regardless of the age of the person carrying it, they’re going to have genuine concerns.”

His concerns are not unfounded, with respect to the fact that if something is believed to be weapon, especially a gun, then it will likely be treated as such in the eyes of the law. Including by both the police and the legal system.

Regardless of whether or not the apparent gun was in fact a toy.

Within NSW, Australia, in the Firearms Act 1996 No 46, following an amendment in 2010, a banned imitation weapon is legally defined as in the legislation as:

“In this section, imitation firearm means an object that, regardless of its colour, weight or composition or the presence or absence of any moveable parts, substantially duplicates in appearance a firearm but that is not a firearm.”

It’s potentially because of the belief that something is a firearm, which can lead to police shootings.

Examples in the USA include police shooting people holding mobile phones, in the mistaken belief the phone was a gun. There can be numerous complexities to such incidences, and what is perceived by a police officer under the effects of hormonal stress responses to the apparent gun, can be considerably different to what a detached and external observer witnesses.

Similarly with such shootings often proving fatal, if the belief (mistaken or not) that someone has a gun and is about to use it, then because of their training the police officer is most likely shooting to kill. The hesitation required to fully mentally process what the perceived weapon truly is, may be the difference between life and death. As such, in conjunction with rapid identification and assessment of the situation, the hesitation is removed through training and conditioning of those serving in the police and armed forces.

Because of this, realistic toy guns, can prove to have grave consequences.

Even not-so-realistic toy guns can prompt caution, such as the recent case in America where a school was put into lockdown because of a man wearing a Star Wars stormtrooper costume with a toy gun was witnessed nearby.

Back in Australia, and again also in Martin Place, earlier this year a man was arrested for carrying a replica gun.

Realistic looking toy guns may still be sold on the basis that they are “toys” and not banned imitation weapons.

Minister for Justice and Police, Troy Grant, said the NSW State Government is aware of the issue, and is considering how best to address the legislation.

Yet in saying that, toy guns are unlikely to disappear anytime soon if, predominantly male, children have any say in the matter. Even if it’s ultimately their parents buying the toys.

It has been argued that one of the more pronounced differences between males and females, is the ability of males to throw farther than females. Beyond which, this throwing ability likely has evolutionary origins, and is also prevalent within concepts of evolutionary psychology. Notably that even as babies, males tend to make more throwing-like actions than do females.

Guns and toy guns are relatively new in evolutionary terms. Yet watching young male children play by making guns with their hands, they can be observed as though they’re throwing or thrusting the imaginary bullets forward when they pretend to shoot. An action which is utterly pointless and counterproductive in shooting a real gun, and unlikely to have been learnt via imitation. Suggesting that this notion of throwing is more of a hardwired trait and vestige of an evolutionary past; and toys guns are a modern day version and manifestation of this.

There is anecdotal evidence from various childcare facilities and schools, that if staff observe children playing shooting games with their hands as guns, the children will be told to “holster” their imaginary weapons. However, the spear-throwing motions may well have up to two million years of ancestry in humans, so whether imaginary guns or real sticks and stones, similar play activities are likely to still manifest in children. Particularly in the boys.

It may also be that the urge to throw things is increasingly being lived vicariously through playing video games.

If toy guns are still made, whether making them appear less realistic has any real impact remains to be seen. Using brightly coloured plastics for the toys, compared to the typically blackened metals for real firearms, could help to set the two apart. Similarly so with using more bulbous and increasingly unrealistic designs for the toys. However, whether this truly solves anything remains to be seen.

As Scott Weber of Police Association of NSW said: “I think firstly we need education for parents and children and secondly, perhaps, very real-looking replica guns don’t need to be on the market.”

No doubt here are elements of attempts at changing the attitudes towards guns, and toy guns, in Australian society.

However, is it that recent events, such as the Lindt Café siege, are still fresh in the memory, sparking an overreaction towards anything resembling a gun?

Furthermore, does making toy guns appear more like toys, simply create a false sense of security and another problem?

If something looks like a toy, do people automatically regard it as such, regardless of the fact that improvised devices and weapons can readily be made to look like anything?

Have your say on the matter in the uthinki question below: