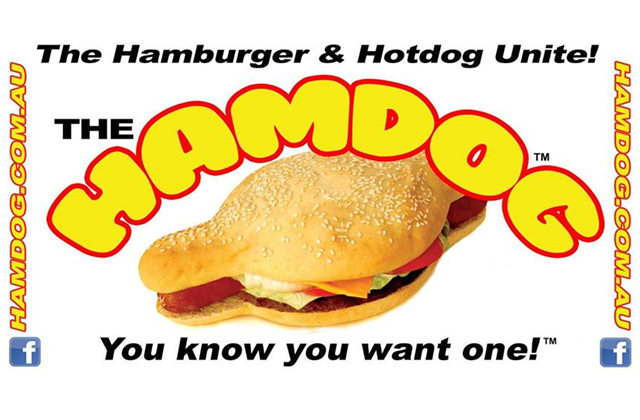 The Hamdog: When Sausage Meets Patty

Technically, it’s not called a Frankenburger.

It’s not really alive either. (Unless people count meat served blue, or steak tartare, as almost-living.)

What this foray into culinary fusion is exactly, is best addressed with a question:

What do you get if you cross a frankfurter with a hamburger?

No, it’s not the Frankenburger, but so much potential is there…

Rather it’s the Hamdog. And it is patented.

Just don’t get too caught up in the differences between sausages, frankfurters, and wieners. Or the localisation of names with frankfurters interchangeably being called anything along the lines of frankfurts, franks, hot dogs, or hotdogs. It can be a confusingly mixed grill.

Body parts sorted and allusions to Dr Frankenstein now probably aside, Australian inventor and entrepreneur Mark Murray has successfully spliced together a hotdog and a hamburger, calling it the Hamdog.

He managed to patent the combination hamburger hot dog bread bun in the USA back in 2009, and has since been on a quest to bring his product to the masses.

Launching the Hamdog marquee about two months ago in Perth, WA, Murray has been spruiking the product for A$8 at local markets, shows, and the races.

As for what exactly the Hamdog is – and you know what they say about hot dogs and their ingredients, or frankfurt factories for that matter – for the curious:

The Hamdog is a beef patty cut in half, with a frankfurt sausage placed in the centre. Held together on either side by the special handmade bun from a Perth bakery, and filled with lettuce, tomato, and cheese. Condiments include the marrying together of pickles, American mustard, tomato sauce, and mayonnaise.

With the exception of the pickles, the Hamdog is made from all local ingredients sourced from Western Australia.

Murray now wants to expand his Hamdog business, taking it across Australia and beyond, to go worldwide.

Perhaps the Hamdog could crack the gourmet hamburger market that’s so popular in New York?

Where the Hamdog sits on the spectrum between fast food and gourmet food is still to be determined. Feel free to debate it below.

It could be the extra meat in the sandwich, or hamburger, that foodies have been looking for.

Gaining a cult following as people come and see what beefcake Frank N. Furter has on the slab.

Becoming a staple of the early morning weekend scene in Australia, akin to the after-midnight kebab.

Or maybe it’s a one-off novelty, a bit like the deep-fried Mars bar.

The only way to tell for sure is to go and try the Hamdog for yourself.

Unless you’re a vegetarian or a vegan, then it might be a bit of a wait for the tofu version.