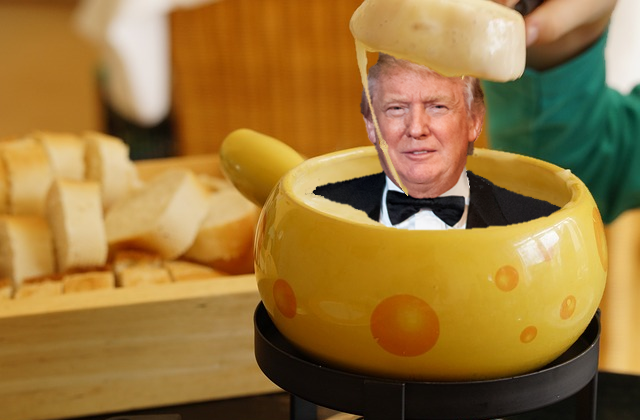 Can Donald Trump The Cheese Wheel?

For a time all has been quiet in the cheese cave. Watching things in the world of cheese slowly mature. Quietly awaiting a celebrity of such undeniable cheesiness, that there’s no choice but to emerge and boldly ask:

If they were a type of cheese, what would they be?

At long last, such a celebrity has finally proven themselves to have exceptionally cheese-worthy status:

Looking down on New York from Trump Tower, Donald Trump prepares to save America from aliens, the mandarins, and anything else lacking in greatness.

He’s like Tony Stark: Genius, billionaire, playboy, philanthropist. But with better hair. And a trump card in showmanship.

What kind of an ace in the hole he is for the GOP, will have to wait until that hand is played. Some polls seem to favour him; but then some pols did also initially favour Hitler.

Donald Trump. The Donald. The Trump. His fortunes have risen and fallen like so many soufflés at times. But now Donald Trump stirs like a giant pot of fondue. Uneasily cheesy. With heated viewpoints, oozing enough to cover everything. And generally lingering in the stomachs of those who’ve partaken, willingly or not.

Donald Trump stirs the pot. Adding an eye of Newt. But no toe of frog, because that could be foreign food. Trump is freedom fries at America’s finest.

Mexican food may make Donald Trump more queasy than a quesadilla with a crime filling, smuggled in by illegal immigrants. The Mexicans have in turn taken to beating Trump piñatas. Elsewhere other Hispanics view Donald Trump as having more in the common with the Democrats’ mascot than the Republican Party.

Donald Trump isn’t racist though. How can he be, if he discriminates against all with equal opportunity?

Fourteen seasons on The Apprentice helped prepare Donald Trump for the presidential role, and to perfect the line:

Now imagine Mickey Rooney’s character from Breakfast at Tiffany’s reading that line and others. Cringe, because that’s the comedy genius of Donald Trump. Even though he may have offended the Chinese and Japanese with his remarks, all is not lost.

If Donald Trump does become the commander-in-chief, the Big Cheese, the President of the United States of America, then at least any tensions and unease with North Korea and Kim Jong-un will be resolved. As both gloriously supreme leaders will bond over their almost-shared hairstyles. Poised, powerful, and preened.

To show his hair is the real deal, and not a toupee, Mr Trump has asked women to touch his hair. A tempting invitation that’s about as well received being offered a piece of cheese that was dropped on the barbershop floor.

Yellowed and soft in parts with a rind, and a crisscross of hair.

People wonder and be polite, but it eludes them how it stays there.

Some dabble with the comb-over. Others attempt the young cool guy bald look, and simply shave what’s left of their hair off. Some delve deeper still into the dark arts of hair with the double comb-over. Then a grandmaster appears and trumps all with the triple comb-over.

Truly, Donald Trump sports a luxurious mane worthy of Cecil the lion. And what a smile. Combine that with Donald Trump’s views on gun control – which some applaud along with the Second Amendment – and gun wielding dentists could be on safari and hunting him down any moment now. Not because they dislike Donald, but because they appreciate him as sport.

Trump could be the trophy proudly displayed in the classic American den. Whether he’s the pride of the New York jungle, or the inspirational bald eagle awaiting taxidermy. Somewhere, somehow, a conservative is no doubt mounting something on their mantelpiece. And will probably smoke a cigar afterwards.

Democratically now moving away from any Monica Lewinsky references. It’s back to the cheese. Be it blue vein or some other type, because that’s what it’s all about. Parodying a celebrity in the melting goodness of their own cheese. Or placing them on a platter of it, depending on mood. Every spin wins a prize.

All that’s now required is for the people to vote on what type of cheese Donald Trump is in the uthinki question, by pressing the green button immediately below.