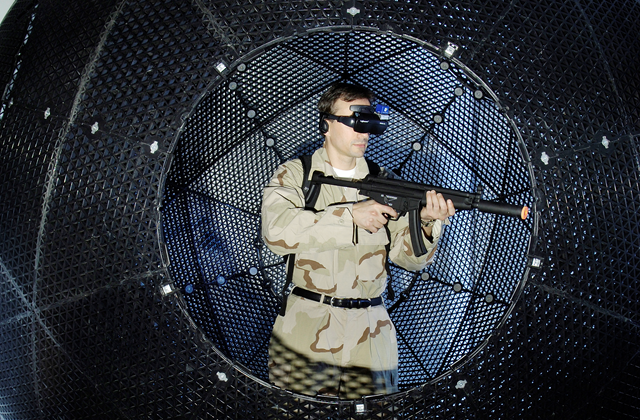 Virtual reality (VR) has been a long time coming. Attempts have been made at it. Like Nintendo’s ill-fated Virtual Boy back in 1995, but as the red and black graphics demonstrated, the technology really wasn’t ready yet.

Skip forward about two decades, and the distance has delivered better technology and various lateral thoughts on the VR matter.

Movies have dabbled with 3D, and it has been a mixed bag. The glasses don’t exactly endear themselves to a lot of people, and the visual experience doesn’t always work. At times giving the sense of 3D films being the lovechild of a bad pop-up book and Mode 7 graphics from the 90s.

Nintendo made the attempt to do away with the glasses entirely and still give the 3D experience, with its handheld 3DS. Of course the viewing area is tiny compared to the cinema screen.

Others such as the Oculus Rift, have stuck with the headgear approach in an attempt to give the fully immersive virtual reality experience the world has long been promised.

Then there’s that step kind of sideways and somewhere else at the same time, the concept of augmented reality (AR). Taking elements of the real world, as visually perceived, and adding extra computer generated elements to be seen with them. Such as digital information, graphics and animations. Which may occur via phone screens. Or the long gestating, but still not-dead-yet Google Glass. With the latter, as enticing and interesting as having the almost God Mode power of Google at their eyeballs may be to some, the prospect of wearing glasses often loses its appeal somewhere around the time a person becomes a teenager.

Somewhat spanning between VR and AR, is the Microsoft HoloLens. Which, whilst still requiring the wearing of a glasses-headset combination, aims to combine the real world with holographic elements, to give a mixed reality computing experience. Apart from Microsoft keeping the world up to date with HoloLens tweets, the experience of the HoloLens at E3 has generally been favourable, and it’s viewed as having a lot of potential.

Although the HoloLens viewing experience has been said to be more limited than the fully immersive VR holographic experience the marketing may have implied, and closer to the AR experience.

However, whereas much of the technology is aimed at visual augmentation and potential immersion, the Virtusphere aims to also include physical immersion. With the user being able to traverse within a 10 foot (3 metres) sphere coupled with the VR headset.

No firm price has been set on the HoloLens yet, and along with similar technology such as the Oculus Rift, don’t expect a release date before 2016.

Until then, it remains to be seen whether the VR and AR technology is finally able to get off the ground and into the mainstream. For a very long time it has been vapourware and maybe held in the hands of the few enthusiasts and early adopters.

Prefer one hologram to another virtual environment?

Or one piece of technology to another?

Have your say about it in the comments and uthinki question below: