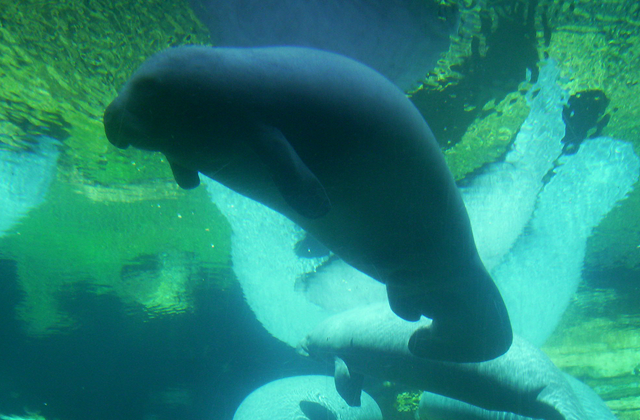 In what may well be a serious contender for the overreaction of the year, one girl found herself more than a little freaked out when a manatee swam past her. Never mind that manatees are gentle and docile herbivores. Of course if you were unaware of what was in the water, and some strange and large creature suddenly swam past, being a little ill at ease can be understood.

Let’s not forget that the manatee has a long history of mystery surrounding it. Sailors back in the day were said to have thought manatees were mermaids. Which may say a lot about long voyages at sea and rationing rum.

Mistaken mermaid or not, that didn’t stop the girl shrieking somewhere between a Siren and a harpy about her particular manatee encounter.

What may defy logic even more was that as she was swimming, she was carrying around her selfie stick with her. Rather than fleeing, it was all filmed instead. Just when you thought it was safe to go back in the water… At least someone was willing to sacrifice themselves to protect their selfie stick. The upside was that the whole ordeal was captured and posted to YouTube. So sit back and enjoy the manatee matinee, or some other similarly bad pun depending on what time you’re watching it:

With the minute or so of fame been and gone, the world awaits its next cautionary travel tale. Hopefully it will also involve swimming, being armed with selfie stick, and seaweed not attacking. In the meantime, answer the uthinki question below for what best describes her reaction to the manatee.