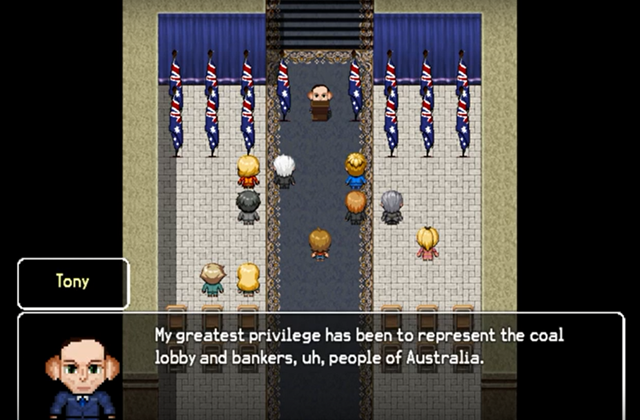 Similar to selfie sticks and the Ghostbusters reboot, it’s something few may want while everyone else is left to find the entertainment in it.

It’s apparently the most unlikely of combinations:

Make that a parody video game about Tony Abbott called:

Tony Abbott and the Quest for the Suppository of Wisdom

Absorbing knowledge amidst crap in a private and somewhat personal way, the game draws its inspirational name from one of Australia’s former Prime Minister Tony Abbott’s greatest gaffes.

Guided by the Tutorial Onion, the RPG sees Tony Abbott argue against a ‘journalist’.

Basic attacks of arguing allow the battle to continue until someone’s willpower (WP) is reduced to zero.

Tony has a few special attacks hidden in his budgie smugglers as well.

Such as nodding silently.

With some rather large ears and not one to table periodic elements, for fear of being lectured about misogyny, Abbott’s RPG adventures will be delivered in episodic format.

First in the Tony Abbott and the Quest for the Suppository of Wisdom series is called Episode 1: The Spill.

It’s due for release in November for PC and Mac; with Android and iOS versions of the game for mobile devices to follow shortly thereafter.

New episodes are expected to be released every six to eight weeks; and should be free to play.

Because it’s politics, fortunately there is a veritable parliament of tropes and clichés to draw from.

Like using some sort of ocarina to time travel back to the values of 1950s Australia.

Where rings of power can decide marriage, or make all sorts of others – and other things – entirely invisible.

Apart from adding a whole new interpretation to the White Walkers, it could also allow for advanced preparation against a far more formidable future foe:

With two-dimensional characters and suitably pixelated graphics, these video games could be the ideal way to view Tony Abbott in his budgie smugglers.

Questing for the legendary Blue Tie of Leadership, said to give the wearer +7 charisma.

Or slaying Julia Gillard and other dragons to absorb their souls and gain new powers.

In the future, maybe more political things will be turned upside down just in time to solve the riddle of Christopher Pyne and Mr Squiggle.