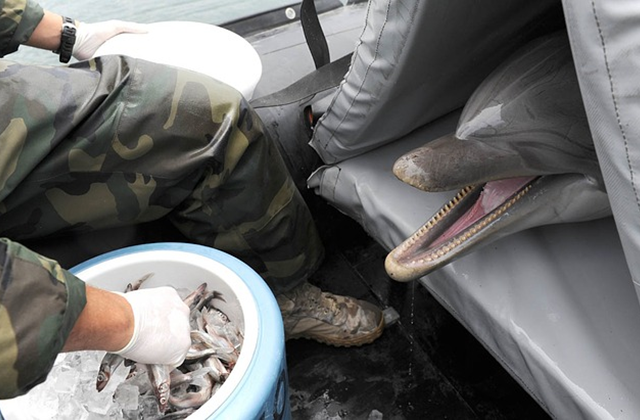 Hamas claims to have caught a Mossad spy dolphin as reported by the Israel Defense Forces Radio. Although the Israel Army Radio station reported it, the source (or sources) remains similarly secretive, much like a spy dolphin.

The dolphin was purportedly captured off the coast of Gaza several weeks ago, and was dispatched by Israel’s Mossad intelligence agency to gather video surveillance on the militant Hamas al-Qassam Brigades. It was reportedly caught after they grew suspicious of the dolphin’s movements.

The dolphin was apparently equipped with a spy camera.

However, others such as the Al-Quds newspaper, have reported that the dolphin was also equipped with a device able to fire arrows.

“The spy dolphin was also equipped with small arrows and bullets to enable it to target humans, including Hamas special forces.”

Increasing the claims are getting stranger.

Next some may start watching the movie Free Willy as though it’s an allegory on espionage and spy craft.

It is true that dolphins have been used by the USA military since the 1960s, including in the both the Vietnam War and Iraq War. Military dolphins and seals do also form part of the Navy SEALS, and are used help clear underwater mines and guard ships against attacking divers.

As for the reality of the spy, possibly robot, dolphin captured off the coast of Gaza, it may be akin to other media reports such as birds tagged with tracking devices from Israeli universities being described as Mossad spies on espionage missions for Israel. Or the shark attacks in Egypt in 2010, which were blamed and reported by some as being Mossad sharks sent to harm the Egyptian tourism industry.

Is the spy dolphin tale too far-fetched to be believable?

A camera on a dolphin maybe, but did the claims of arrows and bullets tip it over the deep end?

Have your say in the comments and answer the uthinki question below because the animals could be watching. And spying.